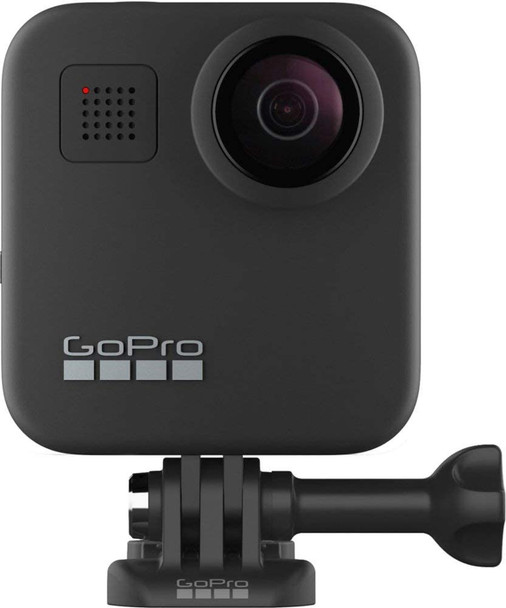 GoPro MAX Action CameraClassic HERO-style skills. Spherical-capture wizardry. Unbreakable stabilization. Make way for MAX, the most creative GoPro ever. Capture traditional GoPro video and photos or shoot 360 footage of everything around you. Snap a panoramic shot without having to pan—just point and click. Choose a digital lens to capture your footage exactly how you imagine it. And with six mics onboard, you get immersive 360 audio and the best sound we’ve ever delivered.Product Features:Traditional GoPro Capture + 360 Capture - Maximize your creative freedom.

You can shoot traditional HERO-style video and photos or immersive 360 footage.Max HyperSmooth - MAX gives you unbreakable stabilization by using 180° capture as the ultimate buffer.Horizon Leveling - In HERO mode, game-changing horizon leveling gives you that silky-smooth cinematic look whether you're getting sideways, flipping through the air or chasing your kids.PowerPano - Pano without the pan. Take incredible 270° distortion-free panoramic photos without having to scan the horizon. Plus, capture motion shots and epic selfies.Premium 360 + Stereo Audio - Six mics capture true-to-life 360 audio and deliver the best stereo sound ever from a GoPro.Directional Audio - Directional audio in HERO mode lets you prioritize sound from either side of the camera, no matter which lens you’re using—perfect for vlogging.

Digital Lenses - Choose from four digital lenses in HERO mode to get the shot. Capture video and photos in Narrow, Linear, Wide and Max SuperView—our widest view yet.Max TimeWarp - Capture super stabilized time lapse videos while you move through an activity. In HERO mode, TimeWarp automatically adjusts speed based on motion, scene detection and lighting. You can even slow down the effect to real time—savoring interesting moments—and then tap to speed it back up.Intuitive Touch Screen - Be a smooth operator. With a touch screen, it’s easy to control your camera. Or frame up your shot, play back